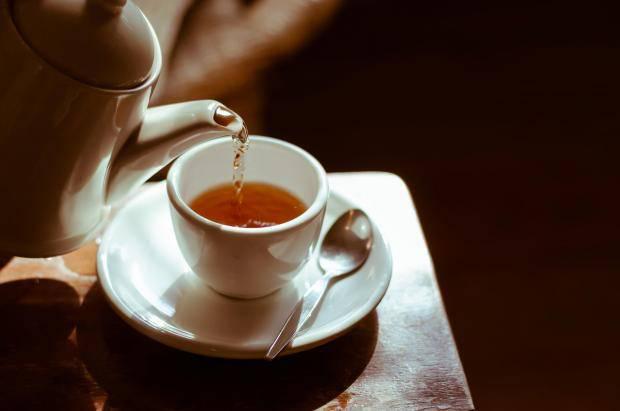 As of November 2014, school must promote British Values.

The DfE have reinforced the need “to create and enforce a clear and rigorous expectation on all schools to promote the fundamental British values of democracy, the rule of law, individual liberty and mutual respect and tolerance of those with different faiths and beliefs and for those without faith.”

At Woodcote these values are embedded throughout our school day and reinforced regularly in the following ways:

Each year the children decide upon their class rules and the rights associated with these.

We have a student council that meets to discuss issues raised in class council meetings. School Council members are elected, two from each class, voted in by their peers with year 6 children supporting the younger classes – reception and year 1. The roles and responsibilities within the council are voted on from within the council and taken very seriously. The School Council meets weekly, following an agenda and taking minutes. Actions taken by the school council are carried out in a democratic manner. The council is genuinely able to effect change within the school.

They also select and promote various charities we support during the year and recommend any immediate response for fundraising we should support as any crises occurs across the country and world. The council has a noticeboard in the hall where it displays its achievements, minutes and plans.

When there is a local or national election, the year 6 run their own campaigns, hustings and their own elections.

The Rule of Law

The importance of laws, whether those that govern the class, the school, or the country, are reinforced at every opportunity.

Pupils are taught, from day one, the rules of the school. These cover rules in class, playground rules and safety rules. Pupils are taught the value and reasons behind rules and laws, that they govern and protect us, the responsibilities that this involves and the consequences when laws are broken. Visits from authorities such as the Police, the Fire Service and cyber safety groups help reinforce this message.

The year 6 children attend Junior Citizens run by the Fire Service and learn about safety as well as working with the emergency services in emergency situations.

At Woodcote, pupils are actively encouraged to make choices, knowing that they are in a safe and supportive environment. As a school we educate and provide boundaries for young pupils to make informed choices, through a safe environment. Pupils are encouraged to know, understand and exercise their rights and personal freedoms and advised how to exercise these safely, for example through our eSafety and PSHE lessons. Pupils have a wide range of options available to choose designed to enrich their time at school through music, PE, team sports, computing and life skills such as cookery.

Children are encouraged to recommend and run lunchtime extra curricular clubs with a teacher mentor.

Children are encouraged to express their own views respectfully and to listen to those of others even if they respectfully disagree.

Mutual respect is at the heart of our every day values. Children learn that all their behaviours have an effect on them and those around them. All members of the school community are encouraged to treat each other with respect.  We have a number of children with differing abilities and everyone is treated as an equal.

Year 6 are trained as peer mediators and are called upon to assist with pupil disagreements across the year groups. Year 5 and 6 are also trained as playground leaders and lead sport and activities for younger children each playtime.

Our partnership of schools presents awards after every sporting event. These are under the 2014 Olympic Value headings.

Our children run our Friday sharing assembly where each class will present what they have done this week.  All children listen well and celebrate these achievements with each other.

Within our school community we have a number of different cultures and faiths represented. Members of different faiths and religions are encouraged to share their knowledge to enhance learning within classes and the school.

The children have visited places of worship that are important to different faiths, namely a Hindu temple, a Jewish synagogue and out local church.  We value the backgrounds of all our pupils and families and we undertake a variety of events and lessons to celebrate these. We have found this approach to be enriching for everyone as it teaches tolerance and respect for the differences both in our community and the wider world.

In February we had a multi-cultural and RE Around the World curriculum week where we cooked, danced and sang our way through different faiths and cultures.

Through History pupils are taught about significant periods in British History and are encouraged to identify these in chronological order.

In KS1, there is a strong focus on the work of famous British figures both past and present; these include Florence Nightingale, Robert Scott, Shakespeare, Guy Fawkes, Dickens and Brunel. The children really enjoy learning about people from the past and in particular those who have had an impact on the modern world and our community.

The school visits the village War Memorial on November 11th, joined by the local vicar. We lay wreaths we had made, gave thanks to the soldiers and pray for those at war today.  We are often joined by members of the village.

Year 5 learn about the Anglo-Saxons, year 4, The Romans and year 3, early settlers in Britain and how they have influenced the Britain we live in today; from the names of Britain’s towns and cities to the cultures and religious beliefs many people have.

In recent years, we celebrated the Golden Jubilee of Queen Elizabeth II, the marriage of Prince William to Kate, whose family is fairly local to us and also the birth of Prince George and Princess Charlotte.

For the past two years we have been invited by the Queen's Swan Upper to join him in Mapledurham as he and his crew count the local signets.  This is a marvelous British spectacle and tradition.  We hope to make it an annual event for our children to learn about the swans, the monarchy and British history. 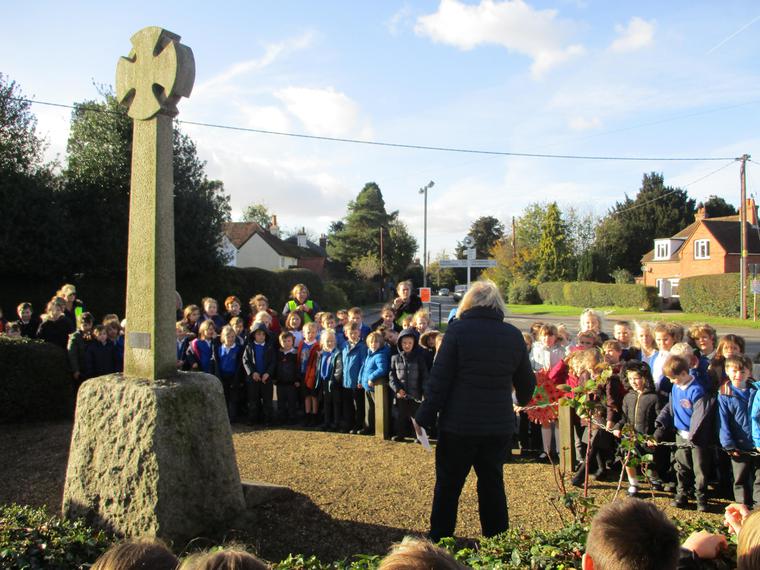 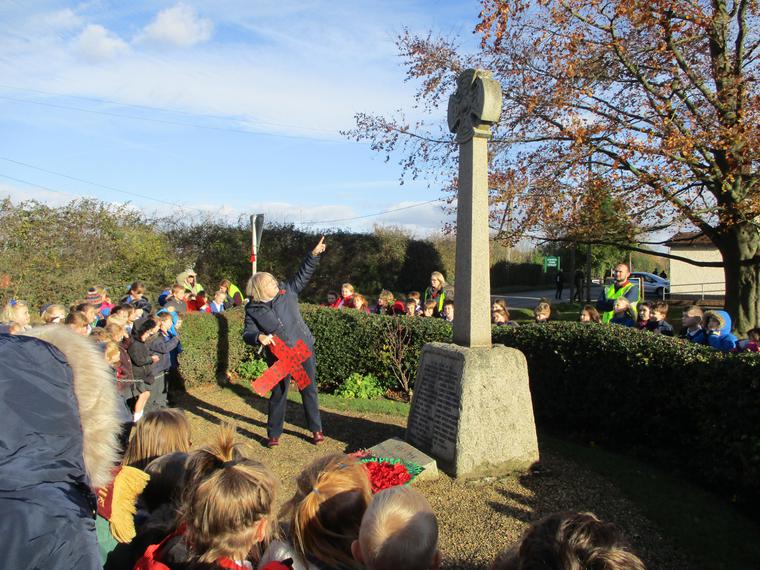 Our Poppy Creations to lay at the memorial 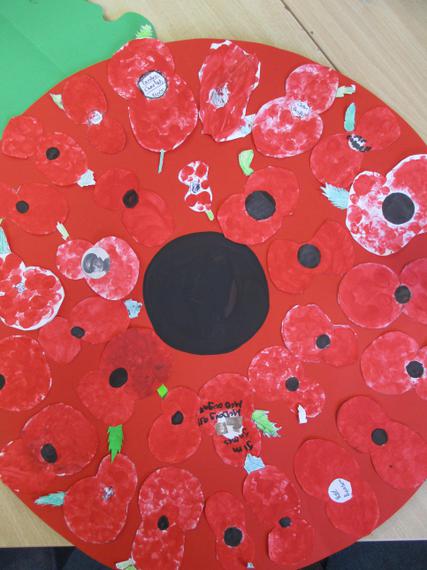 Maple class learned about the Battle of Britain 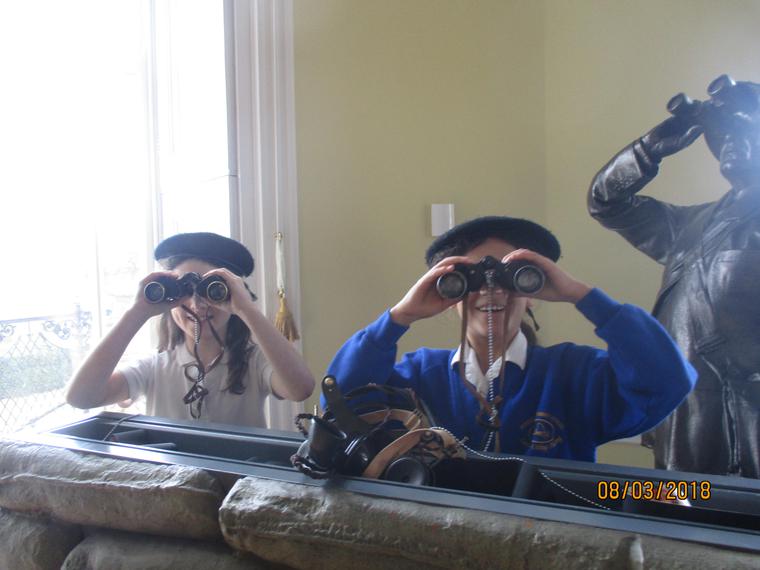 Exploring the cockpit of a Spitfire. 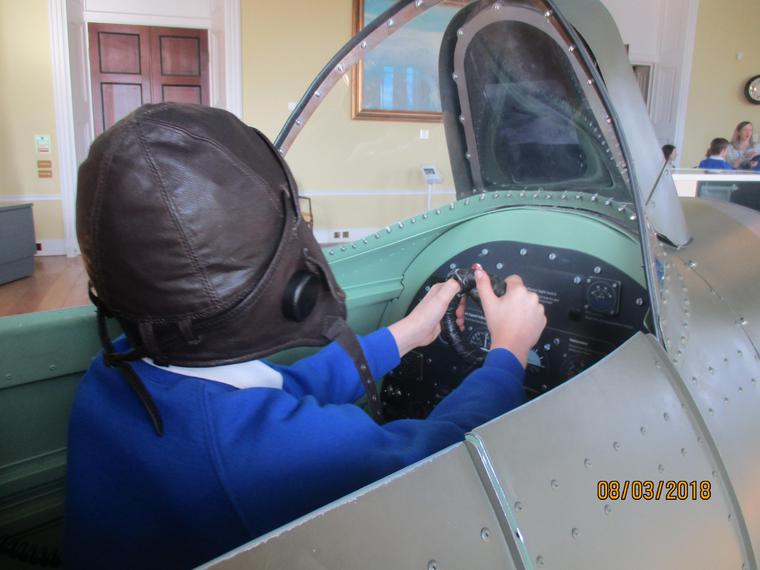 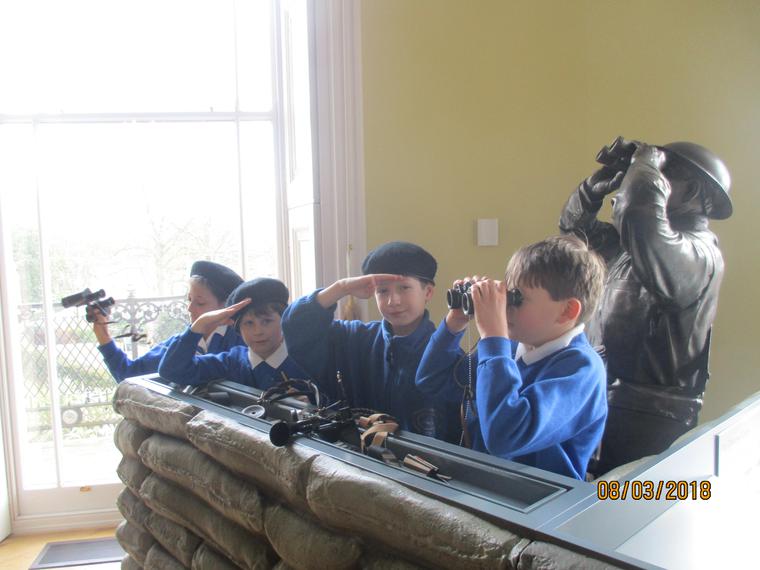 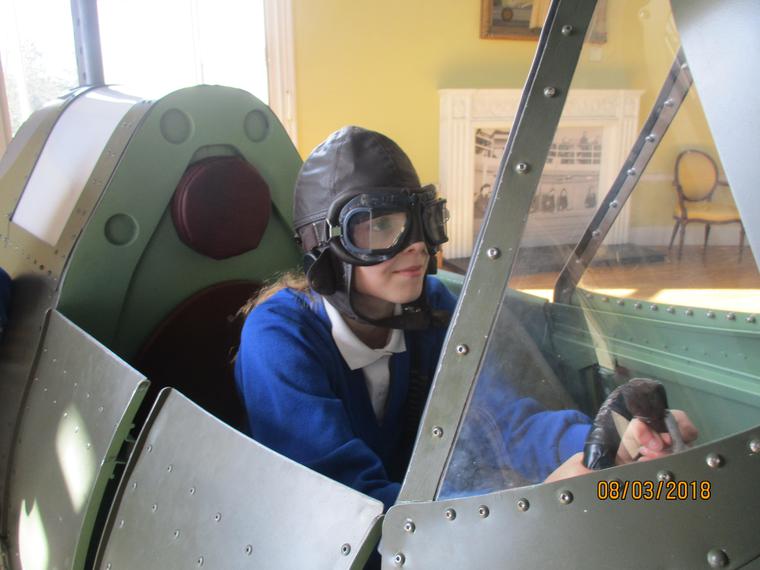 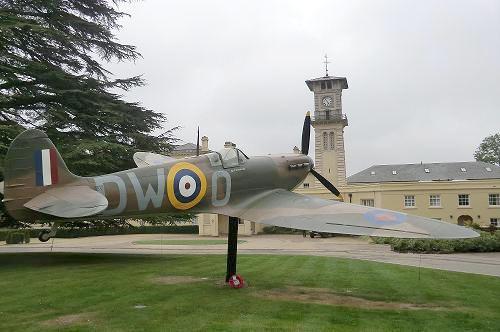